– Audi A4 Avant with OXIGIN MP1

„Schöne Kombis heißen Avant“ (Good-looking station wagons are named Avant) – this Audi claim was created by a German marketing agency in 1995. But this pearl of advertising wisdom is still just as true nearly a quarter of a century later, since the design of the Audi Avant models is timeless and elegant – albeit not exactly exciting. However, the tuning market has some help to offer, of course, as the vehicle shown here clearly demonstrates, which was transformed into a real eye catcher by its owner, Peter Günther. Without a doubt, one key part of the spectacular makeover was the new set of alloy wheels from OXIGIN Leichtmetallraeder.

This is because the wheels revolving under the fenders of this Audi A4 B8 are multipiece OXIGIN MP1 wheels, which consist of brushed rim stars with a scintillating “liquid red” finish and highly polished stepped wells. An especially dynamic and sizeable impression is made by the bolted OXIGIN multipiece wheels thanks to their rotating, outward pointing spokes. All the way around the Audi, the axles sport OXIGIN MP1s in the entry-level size of 9×20” with 235/30R20 tires. They also come in 10.5×20”, 9×21” and 10.5×21”, as well as 9×22” and 10.5×22”. The ability to order rim stars as well as stepped wells in a wide variety of finishes opens up almost unlimited possibilities for individual color combinations.

The Audi’s wheels are shown to best advantage thanks to its uncompromising lower suspension setting, the work of a Bilstein Performance Airride with an Air Lift Performance control from the null-bar product range. To go with the rim stars, the Audi brake calipers pressing on the Zimmermann sport brake discs were also painted red. There is also plenty of red to be found on the glistening, silver-and-black-based design wrapping that encases the entire body. Before the specialists at WRAPCARSTYLES applied it, the car body underwent several modifications: the front bumper along with the cup spoiler and the side rocker panels are from Rieger Tuning, the rear diffuser and rear spoiler from CSR and the specialists from Mücke Carbon provided front fenders that are three centimeters wider.

The power of the 1.8-liter TFSI turbocharged engine was increased to a total of 190 HP by installing an APR carbon air intake system and a Bastuck Duplex exhaust system, as well as optimizing the software. In addition, the look of the engine compartment was upgraded by giving it a piano lacquer finish with red pinstripes, leather-covered hood lifters and lids from the RS sports car models.
The interior was also elaborately enhanced: an abundance of white stitched leather and black piano lacquer adorns the passenger and luggage compartments.

All additional facts on OXIGIN wheels, as well as price and delivery information, are available directly from: 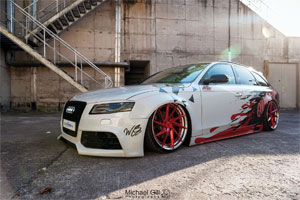 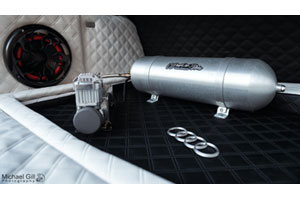 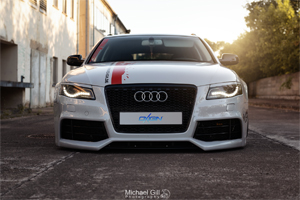 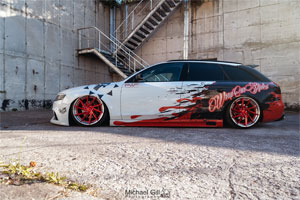 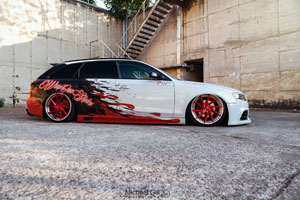 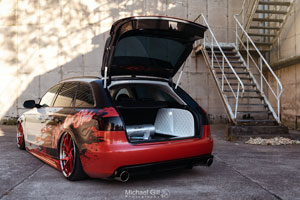 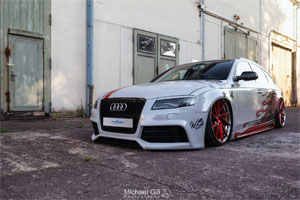